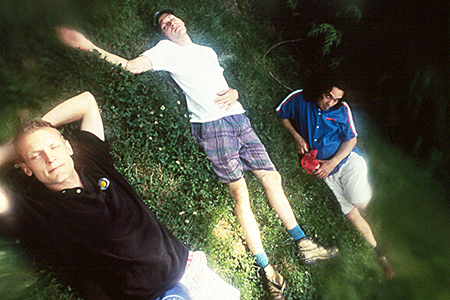 OK. My other YouTube channel just reached 100 subscribers (once it reaches 1000 I will start some crazy giveways!)… so here it is as promised: a TRUE RARITY!  The Presidents of the USA KCMU Radio show!

Show was released on extremely rare bootleg CD-R called “On The Air”.  I wasted about 50-70 dollars on Ebay to get this bootleg ! Only to discoverer that only the first 9 tracks actually works! I managed to save a portion of the track 10 too (I had to ran some click & pop removal plugin to make it listenable). CD-Rs starts to deteriorate over time…So, if you have rare concerts on CD-R. Make sure you’ll save them to a different format. When I received the CD-R I tried to rescue it with two different CD-drives, but the results were the same. The story gets even worse however…I have now lost the damn CD and the case!

Now to the show. I has some nice rarities. Like earliest known live performance of Monkey River! Rare Tremolo Blooz.  All in great quality. It feels kinda strange to listen to this show, as there is pretty much no audience. At end of some of the tracks there is a small applause, and some tracks just ends silently.

I certainly hope that someone has this show still on tape. I would love to hear the whole performance, and the interview.

Thanks a lot for supporting my blog! You can use the link above, if you are a returning customer too. More info about iHerb coupons. Share the rewards code to your friends too!