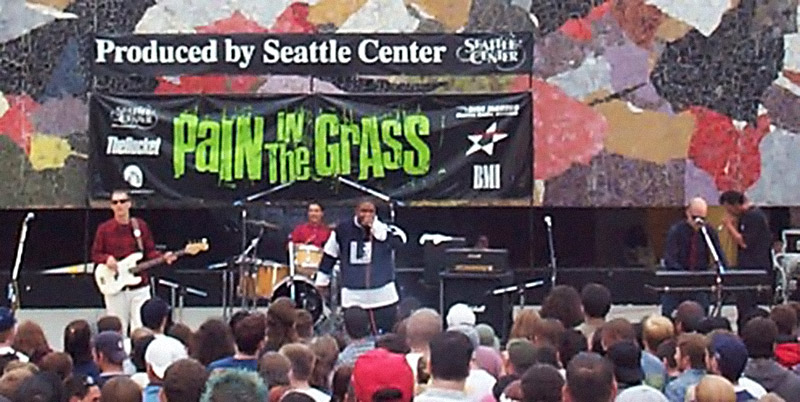 20 years ago there was this great rap-rock supergroup from the Seattle called Subset. Group featured Sir Mix-A-Lot and the Presidents of the USA (Chris Ballew, Dave Dederer and Jason Finn) and later Mike “Outtasite” Singleton joined the band. Subset was a real organic rap & rock group. It was active from late 1998 to 2000. Only officially released song was called “Addicted to Fame”, which was released on the Presidents of the USA Jupiter/Addicted To Fame 12” vinyl before Subset broke up . The Presidents were called “The Quitters” at that time. Handful of studio tracks by the Subset leaked during the golden age of Napster. When MP3 was the hottest sh*it!

“On December 16, 1998, we played those two songs at a show of his in Seattle. The audience went crazy, and after his set was over, we all looked at each other and went, ‘Hmmm. Maybe this should be a band.'”  – Dave Dederer

It’s unknown if the recording above was from that first performance.  Another song was most like Addicted to Fame or We Can’t Stop Us (which was planned as a single at the time).

Pain in the Grass concert comes for a real audio file, a horrible sounding file format before the MP3s started to rule the game. I have no idea where it’s sourced from (a great quality audience tape perhaps?). Maybe it’s the audio extracted from the video that circulates (extremely rare, maybe on VHS only). I haven’t seen the video, which I have tried to obtain for nearly 20 years. Do you hold a DVD copy? I want it! Also MTV (Music Television) filmed this show, as Mix mentions it during the performance of “What Can I Lick?”.

Almost 20 years later I would also discover that the first song “Theme Below Subset” has the same bass line as “Nuthin But Love” from the Presidents of the USA album “Freaked Out and Small” (Released in 2000). Apparently that’s how the Subset started. Presidents had all these leftover funky riffs that didn’t fit to any album. This info is based one Subset interview from back in the days. I might upload it later on, if there is enough interest.

20 years later I’m still waiting for an official Subset album. Over the years there has been always new rumors of that happening, but I don’t hold my breath.

Theme From Below Subset / Something Wicked / Blood From A Stone / She Wants You / Beach Rats / What The Hell / Skinnin’ & Grinnin’ / We Can’t Stop Us / Addicted To Fame / What Can I Lick? / Farmer John / Ribby Rib / Movie Clip / Cruisin’

Want to hear rare stuff? Once my another Youtube channel hits 100 subscribers. I will share something special that not even the hardcore PUSA collectors doesn’t have. Got your attention? Good! :)

Did you know that using affiliate links will not cost you any extra time or money. Using coupon above will keep my blog running! Thanks a lot for supporting my blog! You can use the link above, if you are a returning customer too. More info about iHerb coupons. Share the rewards code to your friends too!