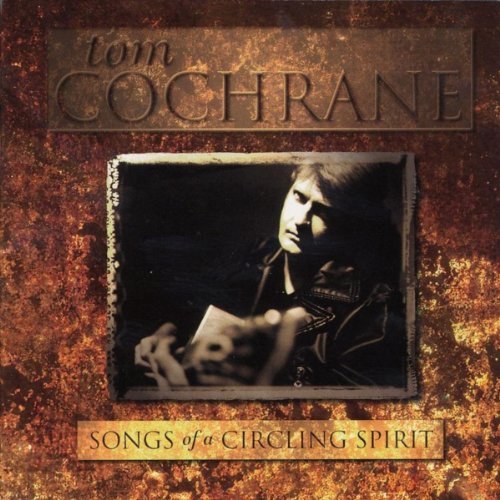 Tom Cochrane’s Songs of a Circling Spirit is one of those albums every Bruce Springsteen fan should check out. I’m going to warn you: This is not a typical review. This “review” also includes a story of how I’ve discovered this album. There is a story behind every album I own. I rarely or never sell anything I have bought…or at least when it comes to my music collection. I’m a hoarder of music. If you are not interested about the backstory, just scroll down to the review part.

Living in Finland late 90’s (maybe in 1996-1997), only major music resource back then on the Internet was a site called AllMusic guide. Believe it or not, it’s still alive. AllMusic Guide website was like a bible to a music fan like me. It was also one of the rare resources that gave a list of related artists you’d like. Of course the first artist I typed was Bruce Springsteen…

…Jackpot! Whole new world opened for me. I carefully wrote down a list of all the Bruce Springsteen related artist to a yellow post-it note. Artists like Tom Cochrane, Southside Johnny, Joe Grushecky, Eddie Money, John Cafferty & The Beaver Brown Band and a long list of other artists I had never heard of. Just by clicking name by name, more and more bands opened. Next thing was a real challenge. I had to find records from these artists. I needed to hear all these artists. Buying albums back then was pretty much a lottery. Sometimes you’ve ended up buying an album from a familiar name, album that had a raving review or purely based by the look of the album cover… When you got back home, you’ve hoped that you’ve ended up with something good.

In 1998, I’ve found the album “Songs of a Circling Spirit” from a used bookstore that had a small selection of used CDs for a sale as well. I had no idea at the time what I was buying. All I knew that Tom Cochrane was a Bruce Springsteen related artist, because his name was on the post-it note I was carrying in my wallet. I had never even heard his hit song “Life Is a Highway” previously. It was not included on the “Songs of a Circling Spirit”. So, it took me a year or two to finally hear it. Second album I purchased from Tom was the “Xray Sierra (1999)”, but that’s a whole different story.

Warning! This review finds me transforming between present and the past.

From the first minute you could tell this was a different type of rock album. Songs stripped down to barebones. This is not a fully acoustic album, it’s more like a semi-acoustic. I love the stereo separation of the instruments. Tom sings the songs like he is playing in an intimate club. After the songs finish, you are waiting for an applause. Maybe because there is no annoying fade outs. Each track actually has an ending.

I really like the dynamics and the sound that this album has to offer. It’s timeless. It might have been ahead of it times as well. Ten years later the whole acoustic indie folk/rock was booming, and still is?

This is not an album for midday, this is the stuff you listen on evenings. Close your eyes, have a glass of wine, and really enjoy. If you just press play and leave the album playing in the background, you’d say this is an easy listening album, which it isn’t! Lyrics will capture you.

When I purchased this album, I had no idea that this album was a collection of his previous work. Only redone in an “acoustic” form. After years later purchasing the albums “Mad Mad World” and “Ragged Ass Road” (Albums where majority of the songs comes from), I totally get the reason why Tom must have been re-recorded these songs. All those loud instruments buried all the great lyrics.

It’s like Bruce with his song Born in the U.S.A, the essential meaning of the song got lost behind the stadium sized rock track, and it’s the main reason why the whole song was badly misunderstood by many people. Big drums and guitars sometimes takes the story away.

Out of Tom Cochrane’s discography. This album holds the number one spot for me. I would love to see more semi-acoustic albums from other artists as well.

Allmusic Guide gave only 2 and ½ half stars to this album. This was an eye-opener for me at the time. There can be great music, even if the rating is low! Before the Internet kicked in and you could preview the tracks. Music critics were like gods at the time. You’ve trusted them. It’s kinda sad that Wikipedia only has one “professional” review of this album, and it’s the damn 2½ stars one!

Now it’s too easy. Just click on play and judge the album yourself!

Still 20 years later I remember buying that album like it was yesterday. That’s the power of buying physical albums. Finding a good album was a like finding a treasure box. Spotify really changed the game. I don’t recall any magic moments of discovering something new from a streaming service. I no longer had to buy albums blindfolded.

Here I am talking about the good old days, like an old man. Those times ain’t coming back anytime soon for me at least. Now as a family man, there’s not enough time to spend a day at record shops (I have to admit that I have no idea where the nearest one even is), nor have the extra funds to buy albums anymore. You’ll also have to justify the purchase. I laughed at this thing when I was younger. I get it now!

I have a retirement plan though. It includes both, a record player and a CD player. I haven’t owned a CD player since 2006. One day I will spend more time actually listening music. This means really LISTENING music, not just adding some background music to keep me entertained while doing my daily deeds.

PS. Yes, there are Amazon affiliate links. I don’t expect to me a millionaire. Typical income of this website (all ads combined) is between $0.02-0.06 a day. Not really a goldmine. If you wish to share this blog post, that would make me more than grateful. One day I’m hoping revenues to pay the hosting bill. Hope you can disable ad-block on my site.

Support my Bruce Springsteen blog and check out iHerb. Great natural products for those who care about their wellness. Re-usable coupon code for both new & old customers. Just click the image: Claim the coupon via this link. Gets added automatically onto your shopping cart. I’m a long time customer, and the website is easy to recommend.