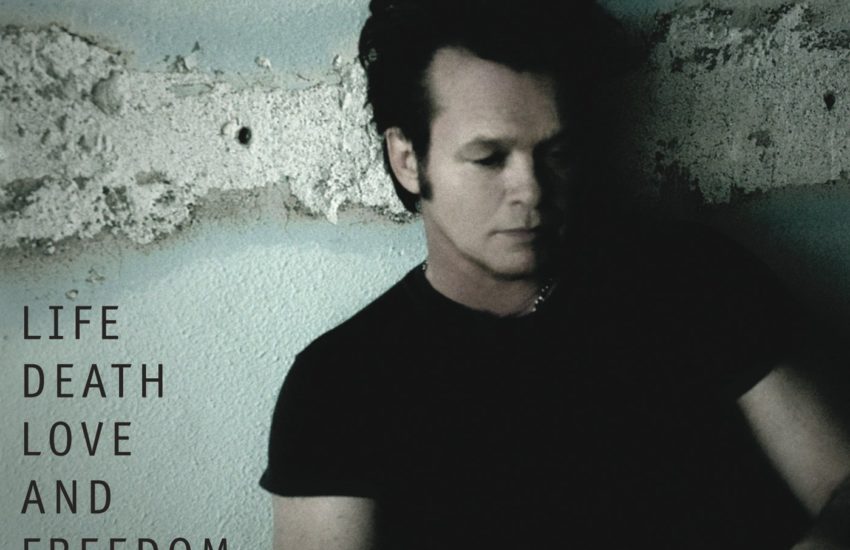 There are currently three living American rock icons: Bruce Springsteen, John Fogerty and John Mellencamp. We can all argue about the top 3, but those are my picks. I don’t celebrate every album they have made. One would say that John Mellencamp is an obvious choice for “Albums That Bruce Springsteen Fans Should Own” series. Anyways…Here’s my take on the… Title couldn’t be anything else. It’s exactly what it says: Life, Death, Love and Freedom. Stories from real life without sugar coating. This is no ordinary work by John Mellencamp. The big American rock “Jack & Diana” sound can’t be found from this album. This is an album filled with traditional folk and blues vibes with very strong lyrics.

Lyrics are mostly dark, and sometimes you’ll think if there is any hope left, and most important question, is John OK? For me the storyteller lives in a cabin alone isolated from the community (from his own will), remembering his past. The dark mood is like a mist, that won’t let you out! More you listen, more nuances you’ll pick. Reserve some time alone, and listen what the man has to say. I don’t find this album a background music. Best served with headphones.

I was hugely surprised that every track is written by John Mellencamp. You could have fooled me that some of the tracks are either traditional folk or blues songs.

Album produced by T Bone Burnett, a producer I have hoped that Bruce Springsteen would use too. Sound is perfect (in the non-perfect way). Album is well produced and mixed when you can only focus on the listening. T Bone Burnett got the best out of Mellencamp. Helping John to make easily one of the best albums in 2008, if not the best.

Bruce Should Take a Note:

I often talk about how Bruce should explore his blues roots with his music. That’s where the core of the E Street Band members also has their roots from. Yet, I think Bruce has been very limited with the E Street Band after the reunion. Carefully protecting his “American Rock” legacy. This happens only with the E Street Band. His solo work expands the boundaries. Bruce usually leaves his safety net home during tours, but the studio work is an entirely different thing. Official products are many times too polished. Often the most interesting work is left behind. This is something that is hard to explain.

In 2002 I had my hopes high with the Rising album produced with Brendan O’Brien. Maybe he could get a new twist going. Result was an over produced, dry and empty sounding overlong album with zero dynamics. One of the biggest victims in the “loudness war”. Songs have plenty of life, but the sound has zero. It had also too many songs (in my opinion). I haven’t listened the Rising album for 15 years. I did it for this blog post, and my opinion haven’t changed at all. BUT

I’m sure I won’t get a huge following, if I say that the most interesting take was the acoustic version of “Countin’ On A Miracle”. A video shot by Danny Clinch. I hate the version on the Rising album, but I love the acoustic version. That’s what happens when you capture magic on spot. You can read the story behind the video from Springsteen Lyrics via this link. Fascinating story.

Yet another “outtake” with some slide guitar blues mixed in. After the the rising show in Helsinki 2003 I stood there and listened the acoustic version playing from the PA system. To be honest, it was one of the highlights I remember from gigs in Helsinki. Other one was a great version of Cadillac Ranch.

Every album tells a story – Life, Death, Love and Freedom:

I’ve played this album in 2008-2009 so many times I can’t remember. I had some dark times in 2009, and this helped a lot. This album is still heavily tied to those days. Long story short: I busted my left knee badly. Knee that was operated first time in 2000 (unsuccessful operation), and it required a two part surgery in 2009-2010 (and some more after that) I used this album as a preparation for the unknown. “If I Die Sudden” was the track I played the most. Pretty much my “aww…f*ck it” song. Yes, I have a strange humor.

This is not a series of albums that sound like Bruce Springsteen, but a list of albums I think Bruce Springsteen fans would like. Not always from the same genre, as I don’t want to get stuck to one genre only. I’m always open for new kind of music. I kinda feel bad for those who are genre limited. Or limiting their ability to listen all sorts of music thanks to their political or religious views. I’m an explorer of music. I believe in music. Every album opens a new path. That’s what music is for me, a path opener.

Thanks again for reading!

PS. Check out Part 1 too. Tom Cochrane – Songs of a Circling Spirit.

Go to iherb.com via this link or photo, and support Brucetapes – It’s that easy!.

Thanks for keeping this blog running. I wish to write more. ?.