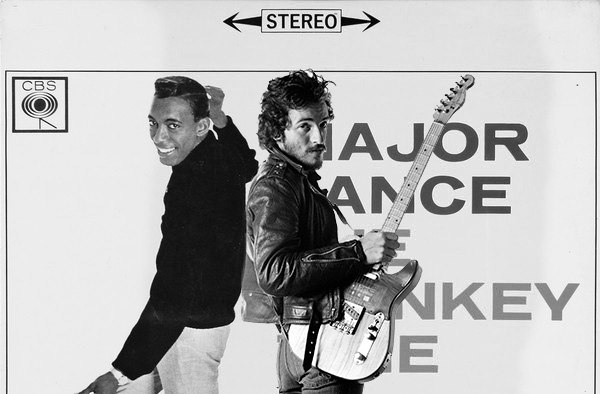 It’s no secret that the song “E Street Shuffle” is based on Major Lance’s “Monkey Time”. I’m pretty sure I have read about it before, BUT due my to laziness, I have never bothered to search out more. The song is written by the R&B legend Curtis Mayfield. It was first released by the Major Lance in 1963 on their album “Monkey Time”.

The song “Monkey Time” by Major Lance was a hit in 1965 when I was 14 years old and Bruce was 15. When he taught me “E St. Shuffle”, I said that it reminded me of “Monkey Time”, to which he responded, “don’t worry about it”. In an interview that I saw about 40 years later, he told the interviewer that “Monkey Time” was partly the inspiration for “E St. Shuffle” I don’t recall where or when that interview was conducted. Sorry.

Now. I had to hear it myself. Yes, it’s very similar…

…but like always. I had to dig deeper. Al Kooper also recorded a version of the Major Lance’s “Monkey Time”, which is available on his album “A Possible Projection of the Future” (1972). After listening to that version, I’m 99% sure that Bruce has based the song to Al Kooper’s version. Check out the tempo changes and bridge. E Street Shuffle is much more similar to Al’s version compared to the original version done by the Major Lance. Judge yourself:

Similarities doesn’t stop there. “New York City (You’re a Woman)” is somewhat similar to the “New York City Serenade”. And if you dig ever deeper to Al Kooper’s catalog. Song titles etc. are pretty similar (or maybe they were just a typical for the era). And yes, I’m aware that Al Kooper recorded a whole bunch of covers, but still. Maybe I’m totally off the tracks. Yet, I find this stuff fascinating.

One more interesting version comes from Laura Nyro (whom lived in New York at the time). Recorded a medley of Monkey Time/Dancing in The Street in 1971:

What makes this interesting is fact, that Bruce Springsteen used to play the song Dancing in the Street regularly during the Steel Mill days (1970-1971), but that is just a coincidence…